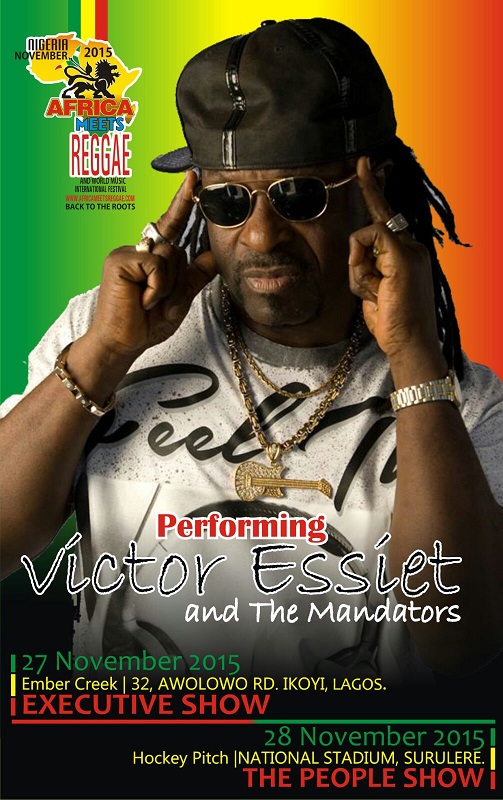 The Mandators, led by the charismatic Victor Essiet, have long been one of Nigeria’s best kept secrets. Thrilling stadium crowds of over 80,000 people, their performances are legendary. http://www.victoressiet.com/

Add to that, several releases in Africa and the massive LP, “Crisis ,” which went platinum for sales beyond half a million, and it is clearly evident that they are poised for success in the United States.
The name “Mandators” has its origin in the days of Victor’s youth. As he explains, “The name Mandators came to me when I was just a boy, through divine inspiration. I didn’t understand what it meant at the time. But now I know that Jah was mandating love and justice through music.

Growing up in Africa, Victor’s early childhood was no indication of the hardships he would have to face as a young boy on the road to manhood. Prior to the civil war and Victor’s birth, his father was very prosperous and though not a musician, he had a great love for and was an active supporter of the arts.
He would sponsor local musicians, sending them to school, as was as sponsoring and participating in local dance ceremonies.

His father’s love extended beyond traditional music and included modern European music and British ballroom dancing as well. Victor’s family also participated in daily Christian hymnal singing, led by his mother. It was in the creative surrounding that Victor entered the world.

As the civil war escalated and his father’s financial status began to deteriorate, Victor could not directly benefit from his father’s support of the arts. Towards the war’s end, its repercussions of affliction took its toll on Victor’s family, resulting in the death of his uncle and sister, and, due to government policy,
the seizing of all his father’s assets, leaving the family in financial ruin. In 1972, tragedy struck again when his father became seriously ill, and a car accident took the life of his mother.
With the family in total disarray and without anyone to look after him, the need for survival took over and Victor strived to stay alive.

Victor’s journeys took him to a variety of odd jobs that didn’t allow him the means to survive, so he decided to look for household work. Through talking with a Naval officer in the town of Calabar, Victor was taken to Lagos and began working for a Naval officer there. While working for this officer, Victor asked for permission to take some time off to attend school. The officer agreed and with his small wages,
Victor paid his own way to attend school. It was at school, that Victor was able to strengthen his natural music talents and follow his desire to grow as a musician. Spending his high school years in Lagos, Victor bought a guitar so that he could arrange his own songs exactly the way he heard them in his head.
His early influences included Ken Lazarus, Jimmy Cliff and inevitably, Bob Marley. As Victor states; “Bob brought a lot of changes, because when Bob’s music came out, the music that came into Africa was the African kind of rhythm, the reggae music that has a lot of African roots.
So when it came to Africa, that made a lot of difference.”

Victor’s dedication and perseverance paid off in 1979, when someone he knew, financially backed him to record the Mandators’ first album, “Sunrise.” Three years later, the Mandators released “Imagination,” an album for which he toured, with a then unknown guitarist named Majek Fashek.
After a three year hiatus, the Mandators released “Crisis,” which swept the country like wildfire. Released on Polygram/Nigeria label, it was one of the first big commercial hits for African Reggae in Nigeria.
Following “Crisis,” the Mandators recorded three more records: “Rat Race,” “Rebel” and “Storm.”
It is the highlights from these three albums that comprised their first US release in 1994 (Heartbeat Records), “Power of the People: Nigerian Reggae,” which was followed by “Crucial” in 1998 (Mystic Records) the group’s first American produced CD and the second U.S. release.