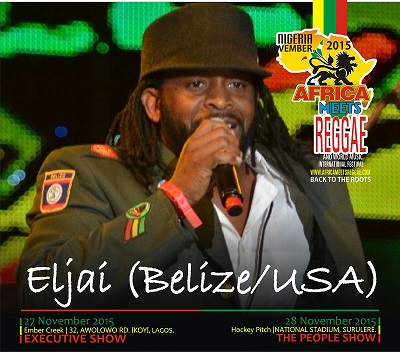 ELJAI was born Lloyd Carlton Mcfarlane Jr. in Belize City, Belize. Soon after, his family moved to the countryside where most of his early years were spent. ELJAI has always been known for his humble and kind ways, joyous laughter and his spiritual enlightening conversations.

At the age of five, ELAJI’s family moved back to Belize City where he attended the Ebenezer Primary School Here he met new friends and discovered his hidden musical talent. Soon ELJAI was singing at school rallies and contests. His talent developed rapidly and he was encouraged by his friends and family to pursue his career in music.

In the late 1980’s ELAJI moved to Los Angeles, California knowing exactly what he wanted to do and ready to focus on his career. He was introduced to the DOMINATORS, a local band and was asked to become thier lead singer- a position which he gladly accepted.

During this time, his love for singing and music grew tremendously and he started to also develop an interest in songwriting. In 1989, ELJAI released the EP Give your Loving To Me, in his native country, Belize. The song, written by ELJAI, sky rocketed on the charts and introduced him as a major atist. ELJAI continued to grow and develop his fan base.

Later that year ELJAI was asked by a friend to be a guest artist on the Pupa Curly FreeMandela single. In the early 90’s Carl MacGregor, the producer of his first EP, introduced ELJAI to Kerry Gordy, the son of the legendary founder of Motown Records, Berry Gordy. Shortly after that meeting, the group Belize was formed and consisted of ELJAI, Carl and Delly McGregor.

ELJAI and Belize continued to hone their writing skills. they were soon signed to Paisey Park Records where they recorded their first album. Belize was later signed to Warner Brothers where they wrote and released I’m Looking Out For You, the theme song for the television show , ” Real Stories Of The Highway Patrol.