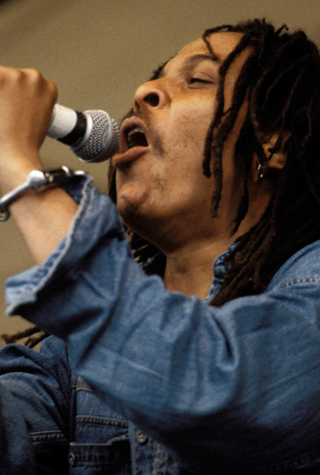 African reggae star Majek Fashek (born: Majekodunmi Fasheke) attracted international attention, in 1987, when his self-penned tune, “Send Down The Rain,” seemed to coax a rain storm that ended one of the worst draughts in Nigeria’ s history. Labled a “prophet”, Fashek went on to become one of Africa’s greatest reggae-influenced performers. His debut solo album, Prisoner Of Conscience, released in 1988, sold more than 200,000 copies in Nigeria alone.

Born in Benin City, once the center of the ancient Sini kingdom, Fashek inherited his love of music from his mother, an Edo woman who raised him following the death of his father when he was eleven years old. A businesswoman, who supplied concrete to road contractors, she inspired him through her participation in traditional religious ceremonies where the Olokun rhythms were used to accompany worship of the river goddess. As a youngster, Fashek played maracas during the ceremonies.

While he developed an early interest in the music of Jamaica, Fashek was equally drawn to the music of Indian cinema. Learning to play guitar while in secondary school, Fashek joined a band, Jah Stix, and began playing in clubs in the capitol city of Lagos.

Fashek, whose name means “power of miracles, the high priest does not live”, had a very close involvement with the late Nigerian drummer and bandleader Fela Anikulapo Kuti.